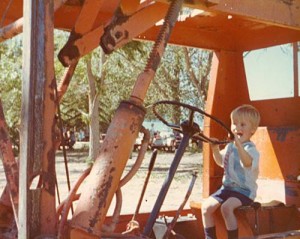 In an effort to make a better living they purchased a home and sawmill on South Main in Logan from Selma and James Jensen, and established the Niederhauser Lumber Company in 1933.

They also logged at other sites in Logan Canyon including Franklin Basin and the sinks areas. After the purchase of the Jensen Mill they continued to run the Temple Fork sawmill during the summers for a short period of time.

As their business grew so did their family. Eventually they had six children, three daughters and three sons, all of whom helped out with the family business. The older sons began to work in the lumber yard at a very early age, learning to attend to any task. Thelma handled the books and sales while Hyrum logged, sawed, and maintained the equipment, even manufacturning much of the sawmill equipment himself.

During the years of World War II they were considered a vital industry and were kept very busy supplying lumber for the war effort. It was necessary for Hyrum to stay home to run the business so he did not serve in the military.

In the early 1950's Hyrum himself built a portable sawmill and moved it to Moore, Idaho and logged on the Challis National Forest. The lumber was cut, sawed, and shipped to the Logan yard. Some lumber was also shipped to a lumber yard they established in Arco, Idaho.

By the late 1950s logging was not doing well in Utah as wood could be harvested easier and cheaper in the Pacific Northwest. Therefore Hyrum and Thelma decided the business should take another direction and established Niederhauser Lumber and Construction Company, Inc.

In 1957 Hyrum bid for a contract to install natural gas. The company got the contract and laid the first gas lines in Logan. The company continued to install gas lines for 46 years. They have also installed much of the underground telephone lines in Cache Valley over the years. In addition the installation of many community water and sewer projects throughout Cache Valley and the surrounding area were done by the company, as well as private water and sewer systems.

In the mid 1960s they discontinued lumbering altogether and became the Niederhauser Construction Company and concentrated solely on underground utility construction. The company became incorporated in the 1970s.

Hyrum and Thelma ran the company together with the help of their sons Del Mont and Gary until 1986 when Thelma had a stroke. At that time, Hyrum gave most of the control of the company to their sons so he could spend his time with Thelma. Thelma passed away on September 21, 1989. Hyrum continued to work with the company in an advisory capacity until his death on August 12, 1991, at which time the business passed to their sons.

The business continued to be operated with the same structure until June 1, 2003 when the brothers divided the business into two separate companies. Del Mont and his son Kelly kept the original Niederhauser Construction Company, Inc. and continued providing natural gas installations, telephone installations, and boring. Gary and his two sons, Nathan and Gavin, formed G & G Niederhauser Construction, Inc. as a spin-off business from the original company, installing water lines, sewer systems, and excavation. The officers of G & G Niederhauser Construction, Inc. are Gary as President, Gavin as Vice President/Manager, Geraldine (Gary's wife) as Secretary, and Nathan as a member of the board.